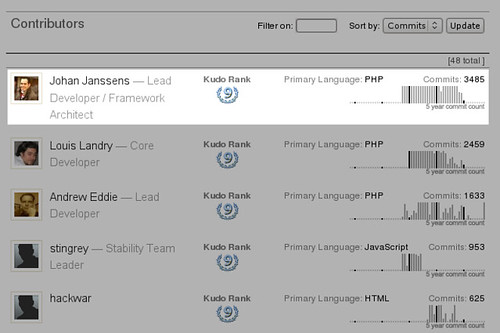 This year, a new category was added: “Open Source CMS Most Valued Person“. I’m pleased to announce that our own Johan Janssens was selected for his work on Joomla by his community peers. Johan is one of the co-founders of Joomla, and has led the development of Joomla 1.5. Thanks to his efforts, Joomla has moved away from the spaghetti code it inherited from Mambo, and now has a super-flexible, object-oriented framework.

With almost 3500 commits (aka code changes or additions in the code repository), Johan has written more Joomla than anyone else, and it’s gonna take a while before anyone catches up. He’s also a top 10 poster in the official Joomla forums, spoke at numerous events, helped set up structures like the working groups and OSM, and led the development working group

That’s why I’m extremely proud to be working alongside Johan on Nooku. He always has great ideas, knows more about software architecture than anyone I’ve ever met, and he’s always happy to share his knowledge.

What can you expect from Johan in the future? Let me just say this: if you paid close attention, you already figured out that Nooku is not going to be ‘just’ a multilingual extension for Joomla, and it’s even going to be very useful for mono-lingual sites. You’ve come to expect great things from Johan, and we’re not settling for anything less. Stick around for some surprises about the upcoming Nooku 0.6.